I’m (fairly) regularly asked what recording equipment I use to record for this podcast and a poem a week, normally by people looking to start their own podcast but also by folk that are simply interested in how podcasts are put together.

I have a standard email that I send in reply as it’s slightly complicated, because over four years of podcasting I’ve used different set-ups for different situations – one-to-one interviews, round-table discussions and recordings of live events. Anyway, it’s probably worth having this information available as a public post.

Below is a list of how I’ve done things, this is not intended as a list of instructions on how to produce a podcast, just a few options for producers looking to start out or develop an existing set-up. I’ve linked to some places where you can buy the equipment I use with prices but you can definitely get everything cheaper if you shop around or buy second-hand. 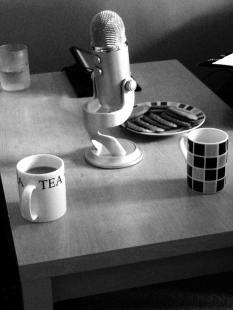 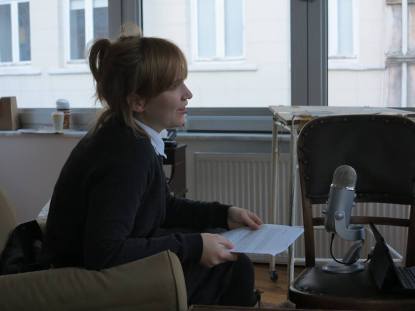 When I started Lunar Poetry Podcasts, back in 2014, I already owned a Blue Yeti USB microphone (£100) and an iPad Mini (£300) so it made sense to make use of this equipment. I tried a few different recording apps but settled on Voice Record Pro (£7-10). I used this et-up exclusively for episodes 1-76, which is, you know a lot!

The Blue Yeti is a very good podcasting mic and will plug directly into your laptop or with an adaptor your smart phone/tablet. It is however pretty heavy and cumbersome and most importantly is designed to be kept in one position and not for ‘in the field’ recording. Early episodes are full of bangs, thuds, donks and plonks as guests dared to wriggle in their chairs and touch the table that the mic was stood on. If you’re looking to record at home straight into your computer this is a very good microphone.

Voice Record Pro is very rudimentary compared to other editing options but was all I could afford or was capable of downloading onto my iPad. It allowed me to set recording volumes and cut out mistakes but not much else.

Had I not received Arts Council funding I would have stuck with the set-up. Speaking of which…

In the summer of 2016 I received a substantial (to me) grant from Arts Council England which allowed me to invest in new recording equipment and develop the series in general. I moved away from the iPad and the Blue Yeti mic completely.

The following set-up was used for almost all episodes 77-114.

I bought a Zoom H6 recorder (£280), four Røde ‘lavalier/lapel’ microphones (£560) along with the necessary MICON-5 connectors to use them with XLR inputs (£88). This set-up requires XLR cables of varying lengths (approx £50) and good quality headphones for monitoring the recording, I opted for Sennheiser HD-25 (£125) as I had no headphones of my own at that point.

I absolutely love my Zoom H6, it has four separate recording channels as well as it’s two detachable microphones that come in the box when you buy it. The four channels allow you to set the levels of each microphone separately – boosting quieter guests and turning down louder ones. It’s also very easy to record directly from a PA at live events if you’re looking to record readings or Q&As.

Most podcasters won’t require four microphones but I wanted to introduce round-table discussions so the Røde lapel mics seemed the best way to fit four microphones and a recorder into a small backpack and travel around the UK interviewing poets. I really enjoyed using the lapel mics as they’re very easy to set up, take up no table space and are very indiscreet and far less intimidating than a ‘proper’ microphone.

The downside to these microphones is that they are very sensitive to movement (rustling, laughing, breathing etc.) and as they are omni-directional they pick up all background noise. They are very good options if you’re unable to carry a lot of equipment or your guest would prefer not to stay sat in one fixed position in front of a mic stand.

When I received this funding I invested in a laptop (I haven’t included this in the budget as it’s unusual to not have access to a computer and the options here are too numerous if you need to buy one). I began to use Audacity to edit with, it’s a free, open-source programme and is used by many podcast producers. I think it’s a great piece of software to learn on as it’s very intuitive and visually very clear.

However, if you’re using it a lot it won’t take long before you find its limitations. For example I found it a little tricky to layer up different tracks and most importantly the in built noise reduction options are very basic. This basically means that it can often be hard to remove the mic ‘hiss’ which you get with all microphones and portable recorders.

In January 2017 I received another grant from Arts Council England which allowed me to pay for a much more experienced producer to evaluate and report back on the way I was recording and publishing episodes. The result of this consultation meant reinvesting in equipment…

I already had the Zoom H6 recorder (£280) and XLR cables (approx. £50) and Sennheiser HD-25 headphones (£125). The main issue was sound quality, especially when it came to guests reading their work on the podcast which was to become central to the, then, new a poem a week series.

I sold three of my Røde lapel mics and bought two BeyerDynamic M58 microphones (£300). These microphones are amazing! They’ve made a huge difference to how guests sound. Recordings are much clearer and resonant now and I feel like guests are being far better represented in the recordings. I record for up to one and a half hours which is too long to ask guests to hold microphones so I also bought two table top mic stands (£50)

For editing I now use a combination of Reaper (£42) and iZotope RX6 (which may now have upgraded to RX7) (£240). I’ve been very happy with my choice to move over to Reaper and I think it offers the best value over the multitude of other options. RX6 is an absolutely brilliant piece of software which allows me to reduce background noise without overly impacting on the voice of host or guest and also allows me to reduce heavy breath noises during readings and ‘mouth-clicking’.

Like I said at the beginning, this is not a ‘how-to’ guide, just an insight as to how I’ve gone about things starting from a position of complete ignorance. As a podcast producer you’re still going to have to ask yourself which platform you’re going to host on and how you’ll go about making transcripts available (please make transcripts available!). These issues though are for another blog or even for other people to answer.

View all posts by lunarpoetrypodcasts